We were delighted to host an evening with bestselling author Ruth Druart in conversation with Paul Armfield about her bestselling debut novel, While Paris Slept, and the writing process. Check out an abridged version of their conversation below if you couldn’t attend the event in person.

Tell us a bit about yourself

When I was five years old, I moved to the Island, leaving Basingstoke. We lived in Yaverland, and I could see the sea from my bedroom window, which was amazing. I had a lovely childhood on the Isle of Wight.

Although, when the time came, I couldn’t wait to leave the Island and explore the world. I went to study psychology at Leicester University. Then I got my first job in London at Price Waterhouse. As soon as I started there, I knew I was in the wrong place, but I had a student loan to pay off. So I stayed there for two years. Then I did a TEFL course to travel around the world.

But I only got as far as Paris, and I’ve been there for 28 years now. I’ve had three children there, three boys, all in their twenties now. I wouldn’t have written the book had I not lived in Paris or had children. Much of my own experience is in the book, in hidden ways.

What initially drew you to Paris?

What made you start writing?

I’ve always loved reading, but just after having my third son. I was feeding him in the middle of the night. It was dark and so peaceful, and I had so much love running through my body for my baby. I just let my imagination go. And at that moment, this story just leapt out of me, and I knew I wanted to tell it. I trusted that it had all the elements of a good story. I just had to write it.

So, the story came to you, was it inspired by anything in particular?

My overbearing love for my baby inspired it, and I thought, what wouldn’t I do for him? How far would I go out of love for my innocent, beautiful baby? What lengths wouldn’t I go to? I imagined the most challenging thing to do, and I based the novel on that.

But you hadn’t written anything before this?

Nothing. I didn’t even know how to correctly format dialogue. I just went for it and started writing. But after showing it to a friend, it became apparent that I needed to work out the story properly. So I did a few writing courses. I also joined a few writing groups in Paris of like-minded people. I learned to write slowly; I wasn’t in a rush. I wrote and rewrote. The first hundred drafts were probably awful.

What was the feedback like from your writing groups?

On the whole, the feedback was positive. But, there was this one man, David. I still remember his name. He just hated everything that I had written. He didn’t know why anyone would ever want to read it. But, I had such faith in the story. You have to believe in your work because you will get people who will slam it down for whatever reason.

Did you write from start to finish?

It took so long to write each part because there was so much rewriting involved that I never got to the end. I sent the manuscript off to literary agents before I’d finished it. To see what their feedback was and for a bit of encouragement.

What was the length of time from the inspiration to submitting to literary agents?

I submitted the unfinished manuscript to the first literary agent ten years on from the initial idea.

What kept you motivated to keep going through such a long process?

I trusted that it was a good story worth telling.

We also have a limited number of signed copies of While Paris Slept left. So snap yours up while you still can by calling us on 01983 300044 or popping into the bookshop. 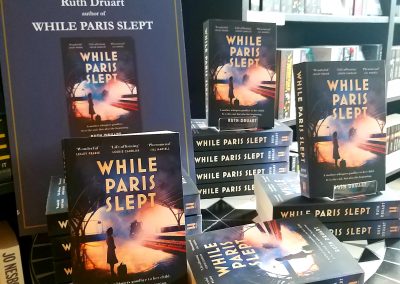 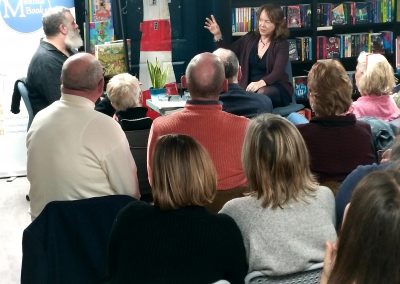