Krissy’s top picks of the latest YA releases 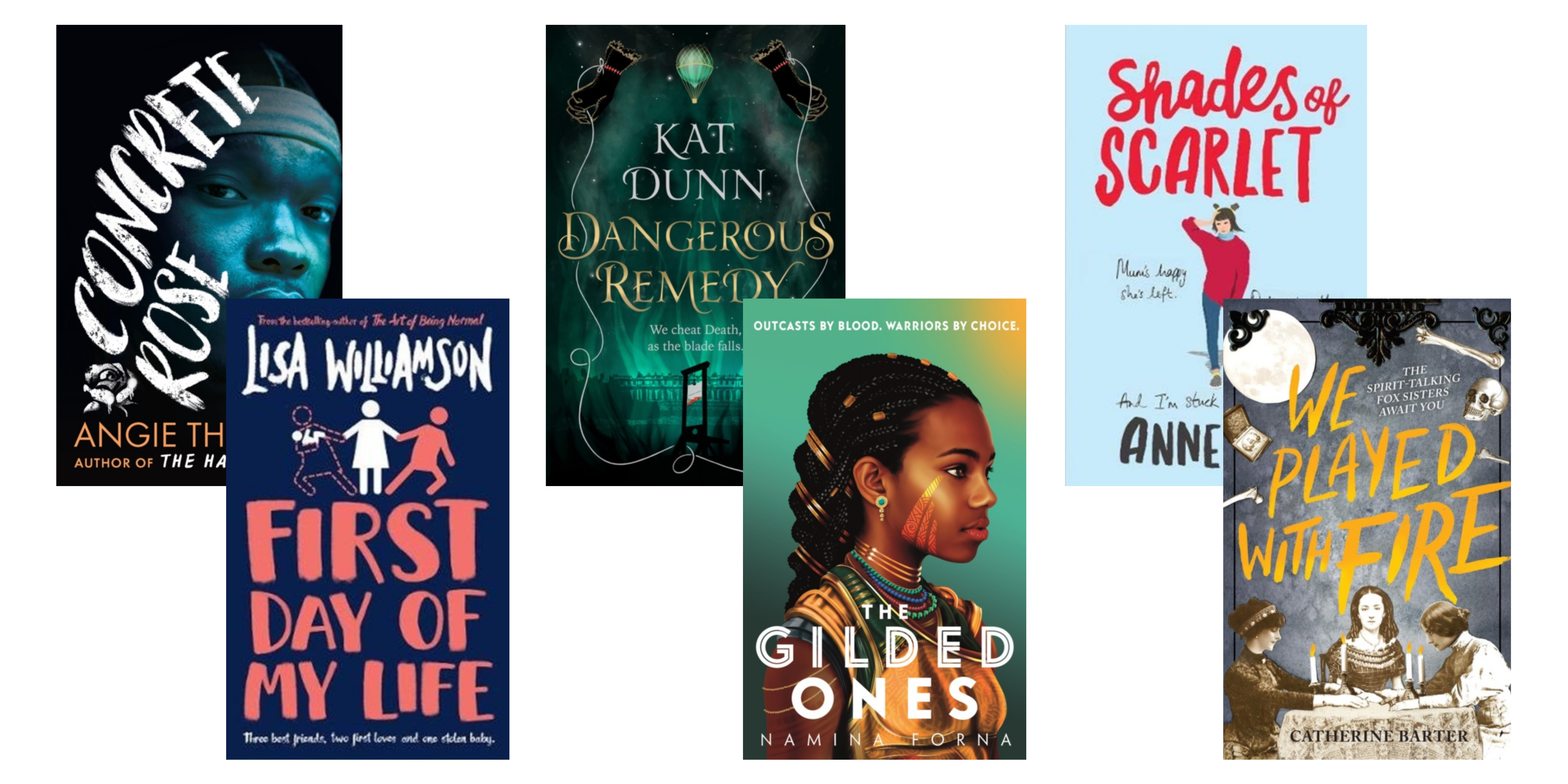 If you think young adult books are just for teenagers then think again! Written by some truly talented and award winning writers they can be moving, gripping, thought-proving, fun and fantastical.  As one of her favourite genres Krissy has taken a look at some of her top picks of the latest YA releases.

The Gilded Ones by Namina Forna – Published 8th February

In this West African-inspired world, girls are outcasts by blood and warriors by choice, perfect for fans of Children of Blood and Bone and Black Panther. Sixteen-year-old Deka lives in Otera, a deeply patriarchal ancient kingdom, where a woman’s worth is tied to her purity, and she must bleed to prove it. But when Deka bleeds gold – the colour of impurity, of a demon – she faces a consequence worse than death. She is saved by a mysterious woman who tells Deka of her true nature: she is an Alaki, a near-immortal with exceptional gifts. The stranger offers her a choice: fight for the Emperor, with others just like her, or be destroyed…

The latest novel from the bestselling author of The Art of Being Normal. There are three sides to every story… It’s GCSE results day. Frankie’s best friend, Jojo, is missing. A baby has been stolen. And more than one person has been lying. Frankie’s determined to find out the truth and her ex-boyfriend Ram is the only person who can help her. But they’re both in for a shock… everything  is about to change.

We played with Fire by Catherine Barter – Published 4th February

Inspired by the incredible true tale of the Fox Sisters, the girls who made their fortune in nineteenth-century America by speaking to ghosts. Maggie has witnessed impossible things. But no one believes her, and now her family has taken her away to spend the winter upstate in a remote, freezing farmhouse. Bored and angry, Maggie and her younger sister Kate start to play tricks: rapping on the floorboards above their parents’ bedroom, cracking their toes under the table, and telling tales about noises in the night. Then the house starts to make sounds of its own. Neither Maggie nor Kate can explain it, but it seems as though someone – or something – is trying to speak to them.

The latest must-read from the multi-award winning author of over fifty novels for children and adults, including Madame Doubtfire, and former Children’s Laureate. When Mum gives her the notebook, Scarlet should be happy. It’s beautiful, with its shiny scarlet cover and its blank pages full of promise. But Scarlet is absolutely not in the mood for a peace offering. Does Mum really think she can tear their family apart and expect Scarlet to be happy about it? And it’s Dad’s fault too. Why didn’t he fight to keep them all together? Now Scarlet has to start a new life, and none of it was her choice. Scarlet decides there’s only one thing she can write in the notebook. The truth, about everything…

The first in a dazzling, historical adventure series set in the extravagant and deadly world of the French Revolution. Camille, a revolutionary’s daughter, leads a band of outcasts – a runaway girl, a deserter, an aristocrat in hiding. As the Battalion des Morts they cheat death, saving those about to meet a bloody end at the blade of Madame La Guillotine. But their latest rescue is not what she seems. The girl’s no aristocrat, but her dark and disturbing powers means both the Royalists and the Revolutionaries want her. But who and what is she?

From international phenomenon Angie Thomas comes a hard-hitting return to Garden Heights with the story of Maverick Carter, Starr’s father, set seventeen years before the events of the award-winning The Hate U Give. With his King Lord dad in prison and his mom working two jobs, seventeen-year-old Maverick Carter helps the only way he knows how: slinging drugs. Life’s not perfect, but he’s got everything under control. Until he finds out he’s a father. Suddenly it’s not so easy to deal drugs and finish school with a baby dependent on him for everything. So when he’s offered the chance to go straight, he takes it. But when King Lord blood runs through your veins, you don’t get to just walk away.

Check out our page on bookshop.org for even more suggestions and to purchase any of the titles delivered direct to your door.