Q and A with Stephan Roman 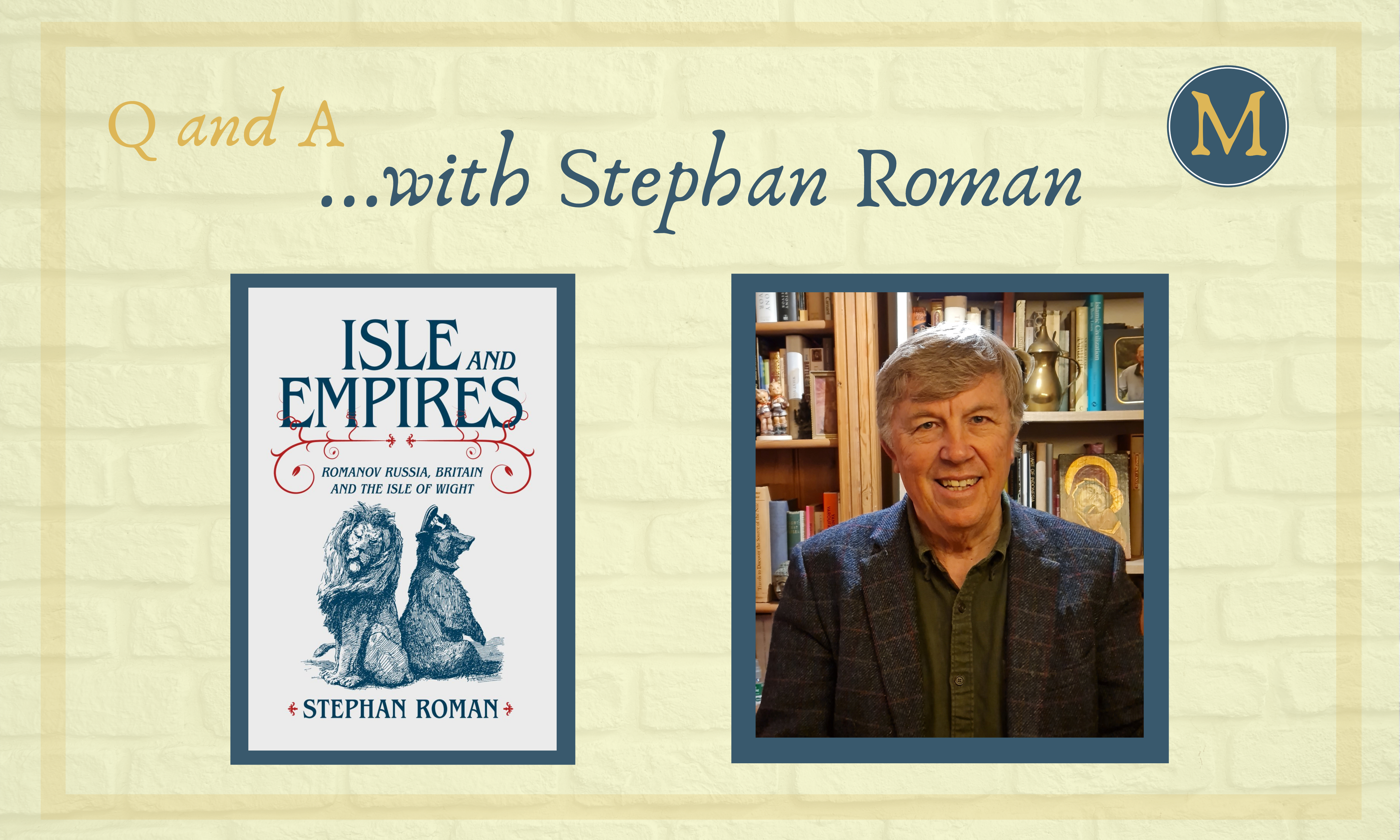 Q and A …with Stephan Roman

The tumultuous story of the Romanovs and their enigmatic relationship with Britain is brought to life in Stephan Roman’s Isle and Empires, as he explores the misunderstandings, suspicions and alliances that created an uneasy partnership between two of the world’s most powerful Empires. The Isle of Wight was at the heart of this relationship, an island off the south coast of England that intimately linked the British royal family and the Romanovs.

Isle and Empires is a journey into a world of Imperial glory and power, family rivalry, wars, intrigue and alliances. It is also a story of Russia’s revolutionaries, spies and terrorists, and the refugees fleeing Tsarist oppression who found shelter and safety both in mainland Britain and on the Isle of Wight. These events reverberate to the present day and much of what happened when the Romanovs ruled Russia continues to set the pattern for the current relationship between the two countries.

We caught up with Stephan to chat about the personal story behind Isle and Empires and the surprising insights he discovered while researching the fascinating links between Romanov Russia and the Isle of Wight.

Growing up how much of your grandparent’s life in Russia did they share with you?

Most of the stories about my family’s life in Russia and Polish Lithuania came through my father and my Aunt Natalia. I met my grandmother a couple of times, but my grandfather Emil Konradovich Romanovsky died in 1939, many years before I was born, so I never knew him. My grandmother was ninety when I last visited her in Poland, but this in no way deterred her from climbing on to a table, and singing me an old Russian love song, with a vodka glass in hand. She then described in vivid detail our family’s flight from Russia, and the kindness of the Romanian family who had saved them from almost certain death.

My father never lived in Russia, and he spent his early years in Vilnius, now the capital of Lithuania, before fleeing to Britain in 1946. However, he passed on many stories to me and my brothers about his parents’ life in Tsarist Russia, and their harrowing escape from Bolshevik Russia between 1920-22.

What made you decide to write the book?

I have been interested in history from a young age, and I was always fascinated by stories of my father’s family, and their life in Tsarist Russia. I studied history at Oxford University, and I read widely about the Romanovs and the events which led to the collapse of the Imperial regime in 1917. If it had not been for this collapse, it is very unlikely that my family would ever have left Russia.

My mother came from an English family living in Southport in Lancashire, so it was this mix of Russian, Polish and English ancestries that drew me to exploring the history of both countries and the complex and tangled relationship between Britain and Russia. In a way, writing a book about the Anglo-Russian relationship was a way of uniting the two strands in my own family history. It was during a visit to the Isle of Wight in 2015 that I first noticed how many associations and links there were between the Romanovs and the Island. This was the catalyst for proposing a book to Peter Harrigan of Medina Publishing which explored the relationship between Romanov Russia and Britain through the lens of the Isle of Wight. Peter was enthusiastic and Isle and Empires is the result.

How important was it for you to include your family’s personal experience of the revolution in the book?

My family’s personal experience of the revolution has been a strong motivating reason for my interest in the Romanovs and the collapse of Imperial Russia. I did not intend to include their story in the book when I first planned it. However, the more I reflected, the more I felt that this personal angle would add an important dimension to the story. The Revolution destroyed an entire way of life that had existed in Russia up till 1917, and consigned millions of the Tsar’s subjects to violent deaths and lifelong exile. I felt that I would not be doing justice to these people- and to my own family- if I did not include their story in the book.

My grandmother told me she saw the body of a young woman who had drowned in the river Dniester, as she attempted to escape from Soviet Russia, and was mesmerised by the pretty flowered scarf that was entwined around the woman’s neck. The sight of this seemed to mark the end of everything my grandmother had had ever hoped for or believed in. The collapse of Imperial Russia was not just a tragedy for the Romanov family but also for the millions of their subjects who had placed their hopes and faiths in a regime which in the end could not save or protect them.

How did you go about doing your research for the book?

My research was based on using a wide range of original and secondary sources, including private diaries and letters, official government papers, contemporary newspaper reports, and a wide range of books and journal articles covering the Romanovs and their relationship with Britain. All these sources are fully listed in my book. I spent a lot of time in the British Library, in the Public Record Office, and in correspondence with the Royal Collections Trust. On the Isle of Wight, I also had excellent help and support from Osborne House, the Royal Yacht Squadron, the East Cowes Heritage Centre, the Ventnor Heritage Museum, and the Classic Boat Museum.

Do you think people will be surprised by how large a part the Isle of Wight played in relations between Russia and Great Britain?

Yes, a lot of people have expressed great surprise when I have told them about the role that the Isle of Wight played in Anglo-Russian relations during the time of the Romanovs. The first connections between the Isle of Wight and the Romanovs date back to Tsar Peter the Great in 1698 and his great friendship with the Cowes shipbuilder, Joseph Nye, and lasted through till 1918.

It was during the Russian Revolution that Tsarina’s elder sister, Princess Victoria Mountbatten, made her ill- fated attempt to bring three of the Imperial Grand Duchesses, to safety on the Isle of Wight. In between, there are tales of Tsarist monuments and yachts, Russian royal visits, and a colony of Russian radicals in Ventnor, turning the town into a centre of opposition to the Romanovs. The high point was, of course, the Russian Imperial visit to the Isle of Wight in 1909, a visit which seemed to mark a new and exciting chapter in Anglo-Russian collaboration. Isle and Empires explores all these intriguing tales.

While writing the book were there any revelations that surprised you?

I was surprised and intrigued by the story of the Russian political radicals and writers who established themselves in Ventnor in the middle years of the nineteenth century and during their time there helped create the foundations of an alternative Russia. Tragically, the hopes that many of them had for a more liberal Russia were never to be realised but in other ways Ventnor might be described as a cradle of the 1917 Revolution.

Russian socialism and nihilism  found expression in Ventnor, and Karl Marx spent several winters there writing his great attack on capitalism, Das Kapital. The way that this small Victorian seaside town stood in opposition to royal and imperial Cowes, where the Romanov family had connections, is a fascinating and little told tale. The Ventnor story also links to the wider story of Russian political refugees in Britain in the nineteenth and early twentieth centuries and the ways that this complicated the relationship between Tsarist Russia and Britain. It seems that British tolerance for Russian political dissidents has a long history!

Tell us about the series of events planned for the launch of the book.

We are planning a range of exciting events to celebrate the publication of the book. We will start with a series of videos on YouTube where I talk about Russian links to the Isle of Wight, and also read extracts from my book.

There will be an online launch on 14 July, which will be open to people around the world to join. There will then be a launch event at East Cowes Town Hall on 15 July, with Russian folk music by Tzigane and an exhibition of photographs from Isle and Empires. The Town Hall is a very appropriate place for this to take place, as East Cowes was the last place that the Tsar and Tsarina visited in Britain. During this visit, the Tsar made a donation to the Town Hall of £100,000, in today’s money, for the poor of Cowes and East Cowes.

On 16 July we will also be inaugurating a Romanov themed walk in collaboration with the East Cowes Heritage Centre called The Russian Imperial Tour of East Cowes. This walk will be repeated on selected dates throughout the summer and will be led by Sarah Lang.

Between 28-30 July, we will be running a series of events in Ventnor in collaboration with the Ventnor Fringe. These will include the launch of a walk in collaboration with the Ventnor Heritage Museum focusing on the links between Russian political radicals and writers and Ventnor in the nineteenth century. There will also be a book launch event at the Arts Club on 28 July, and a Russian themed high tea at the Royal Hotel on 29 July. So, there is plenty to look forward to over the next few weeks!

Do you plan to write any more books?

There is still a lot to do in promoting Isle and Empires so this will keep me busy for the next year. However, I have been researching material for a new book about the East India Company. This is a little-known story about how two officials of the Company, largely overlooked by the Victorians and many contemporary historians, laid the foundations for the Empire in the mid-eighteenth century. This will be a controversial reinterpretation of the origins of the British Empire in India. I worked in India for several years and did a lot of original research in the archives in Southern India, where I came across this story, and decided it would make for an exciting and colourful historical tale.