Review: The Peculiars by Kieran Larwood 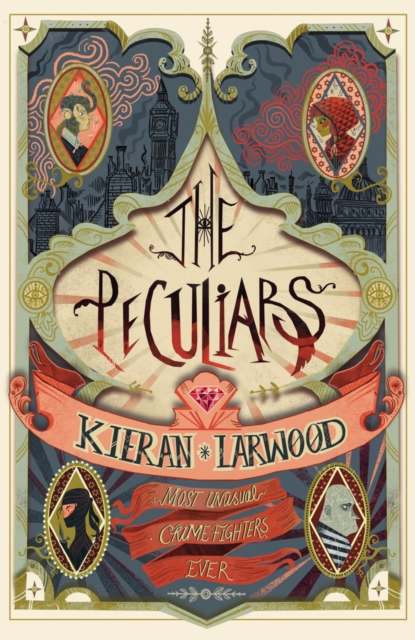 If you love history, mystery and adventure, then this winner of the Times Children’s Fiction competition will be right up your alley. Especially if that alley is a mucky, smelly alley in the middle of smog filledVictorian London where sinister secrets and menacing men lurk in the shadows. Set around a gothic sideshow called Plumpscuttle’s Peculiars it follows a lovable group of misfits including Sister Moon, an ex-assassin who can move at the speed of light and is deadly with a blade, Monkey Boy, ace climber and human stink bomb, Mama Rat and her performing rats, and Gigantus, the man-mountain who is also an aspiring romance novelist.

We are introduced to the group through the eyes of Sheba, an eight-year girl old who believes she was abandoned by her parents because she bears more than a passing resemblance to a wolf. Along with Flossy, the two-headed lamb, she is sold to Plumpscuttle and taken from the only world she remembers, a cage in a rundown shack on the end of the rickety Little Pilchton pier. However, this kind-hearted girl is taken under the wing of her fellow freak show attractions and soon gets drawn into the murky underworld of London where she discovers that the great capital city is definitely not paved with gold.

At night people pay to gawp and sneer but the quirks that make society shun the Peculiars, also makes them excellent at crime-fighting. When Sheba’s new friend Tillgoes missing, the group discover she’s not the first child to be snatched from the banks of the Thames but the police aren’t interested in looking for poor mudlarks. With Sheba’s amazing sense of smell, Sister Moon’s ninja skills and a troupe of very clever rats, the band of misfits encounter all sorts of perils in their search for clues to solve the mystery, including some very deadly clockwork spiders:

‘Oh, mummy!’ cried Monkeyboy, but he took a breath and ran at Magog, dodging at the last minute to avoid its spear and scampering up one great oak leg, where he clung on for dear life.

Between the feet of the giant puppets, Sister Moon danced. All around her skittered the little silver spiders, ticking away in a chorus of clockwork. They shot at her legs, trying to stab her with their deadly needles, while their glowing red eyes tracked her every move.

The Peculiars is the first novel by award-winning Isle of Wight author Kieran Larwood, written whilst he was a teacher at a local primary school. Aimed at middle-grade readers, he brings to life a wonderfully colourful group of heroes against the backdrop of the grimy underbelly of Victorian London. It’s a fun, action-packed, atmospheric story that doesn’t disappoint and the good news is a sequel is in the works.

You can grab yourself a copy of The Peculiars here.

For more information about Kieran and his other books, including the Blue Peter Award-winning ‘Podkin One-Ear’ visit his website.