A Word from the Author: The Wihtwara Trilogy 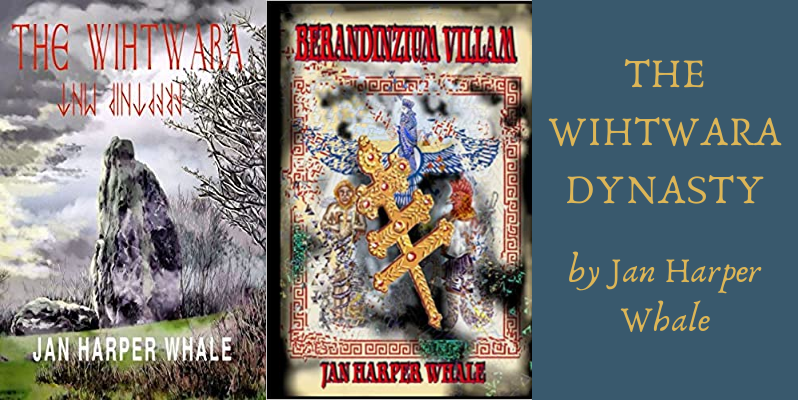 Jan Harper-Whale is the author of The Wihtwara Trilogy, an historical fiction series set on the Isle of Wight. She has released the first two books, The Wihtwara and Berandinzium Villam, and is currently working on the third, The Wihtwara Dynasty.

Below she shares the experiences she had, and the research she has undertaken in creating her novels. She has also included a short excerpt from The Wihtwara.

The project, the whole journey, to accomplish an historically accurate yet fictional record from the “Dark Ages” on the Isle of Wight, began for me decades ago. After several visits to our famous Longstone at Mottistone, I saw flashes of the past, a battle on Chessell down that remained with me. I contacted an archaeologist friend about this, and he described the aural legend, of a huge battle, which was an act of genocide by the Wessex Saxon army led by, the mercenary Caedwalla, on the orders of Bishop Wilfrid in 686AD.

The search began. It has taken years of painstaking research, of archaeological finds, DNA mitochondrial evidence and linguistic evidence to piece together this entirely forgotten history of the Isle of Wight, then named Wihtland. This battle was in fact an act of ethnic cleansing, purging the island of a peaceful race of Pagan people who would not give up their beliefs in honouring the Goddess Nerthus and Woden. They would not become Christianised. Their name was the Wihtwara, People of the Spirit.

There is now mounting evidence to show that theirs was a Royal Jutish Kingdom, with a bloodline back to their Aell Fæder (All Father) Woden. My latest research has discovered that bloodline of kings on Wihtland from King Wihtgar in 510AD to the last King Arwald, who fought for the survival of his people in 686AD.

There were survivors, nevertheless, and the Royal bloodline continued and shows King Alfred’s mother Osburga to be a descendant of the Wihtwara.

Caedwalla and Bishop Wilfrid replaced the Wihtwara with Saxon outsiders who were Christian. Caedwalla gave Bishop Wilfrid two thirds of the island, a legacy stretching to modern day.

As a peaceful nature-loving people they were the guardians of their island home.

Our lives, in the Wihtwara tribe were governed by our Gods and Goddesses, Thunōr bringing rain and Sunni heating up the crops to grow to fruition. It was a bountiful harvest this first season. There were no hands that did not grip, shape, and trim those crops. Except for the aged and infirm. They prayed. For in this, we had all offered up our own silent or whispered prayers as we worked. Our lives depended on this good harvest. And we had to prepare for the second crop of horse beans, our hardy winter crop. Eileifer commanded we take all the grain crops up to the new storage on Etdreðecumb hill. It was high enough to keep them dry. Barley was our main crop, with wheat, that the Romans brought to us. It was a good grain but not nearly as hardy as barley. Our warm and temperate climate favoured the growing of it though.

And then, our sacred area, where the precious hemp seed was sown. It held drycrǽft. It held the power of Wōden himself, the All Father. No other crop provided our kin with all manner of things needed to live well. Next to our bees, hemp was the most precious life-giver and honoured by Nerthus.

And it was here, nearing twilight, that I came to sit quietly in the field, which was now ready for the second crop to be sown. Mōnã was just reappearing from the shadow time, where all the earth’s creatures and the trees simply held their breath. It created a perfect stillness. Wyrd became overwhelmingly powerful. It was almost too difficult to breathe, so shallow, low breathes escaped me as I knelt in the centre of the field, waiting. A large Hare appeared, standing up high on his haunches, staring straight at me. We held that moment in sacred time.

The herbs Lífa had collected lay before me. Together with honey from our bees, I made the salve to bless the earth. I was sitting in the centre of the hemp field, the four turfs before me in a circle. I gave power to each one with the salve, calling out with both hands raised to the sky.

The message from our Ancestors, the Wihtwara:-“We only truly die when we are forgotten”